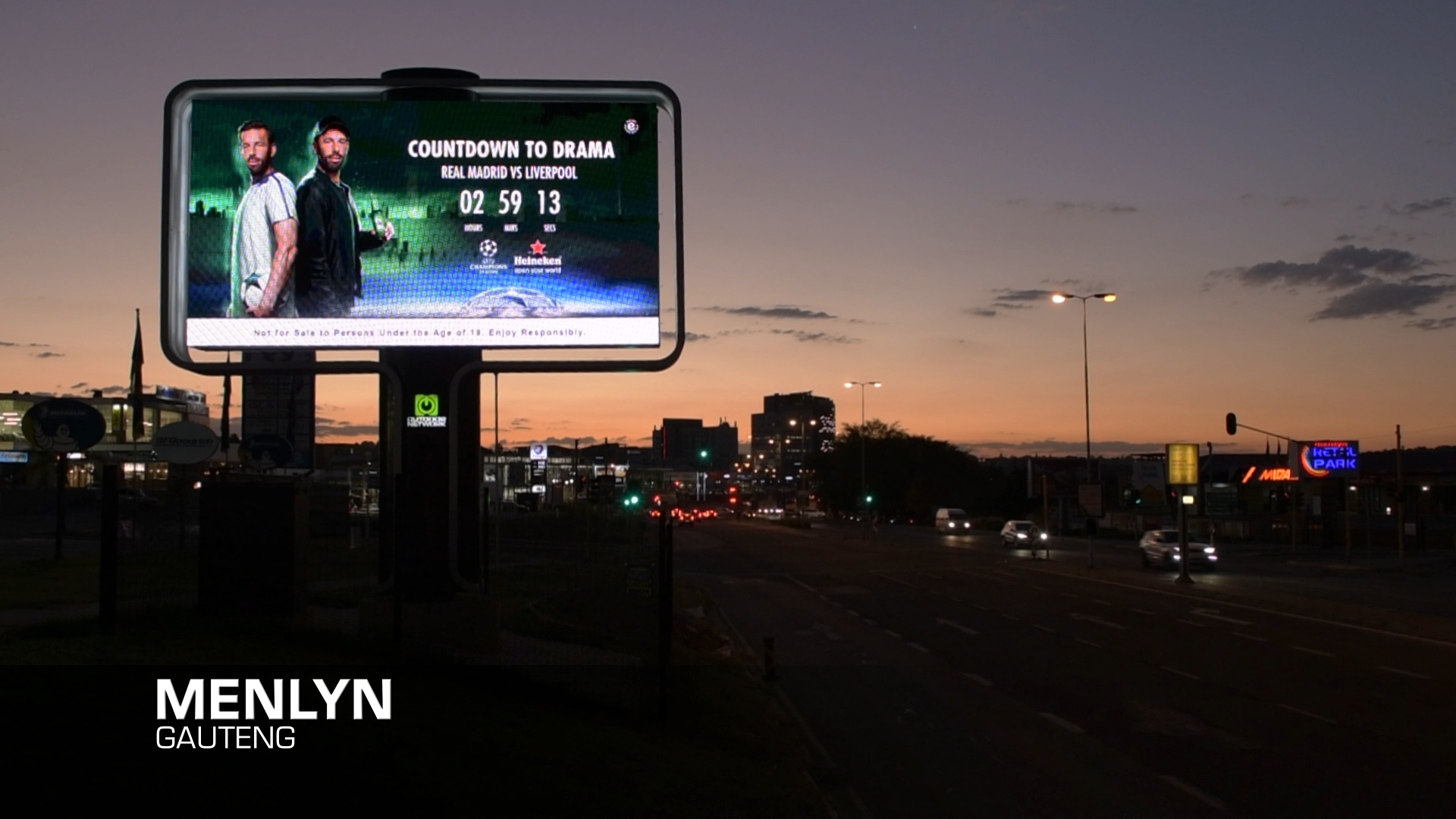 What do you do when one of the world’s biggest beers and one of the largest sports events on the planet ask you to ‘share the drama’?

You engage…particularly when they’ve used cutting-edge billboard technology and a visually-captivating creative execution to grab your attention.

That was the case when UEFA Champions League sponsor Heineken collaborated with Outdoor Network to roll out a national campaign across Outdoor Network’s digital network, inviting football fans to watch some of the world’s biggest teams go head to head on television.

This provided the perfect platform for Heineken and the globally-watched UEFA Champions League to build anticipation and drama, leading up to the final in Kiev, Ukraine on the 26th of May.

Outdoor Network was able to tap into strategically-located digital out-of-home sites in key locations across its national network, while at the same time offer up ground-breaking digital LED rotating billboard technology that provided real-time dynamic content change, which was a first in South Africa.

“Major international sporting events provide brands with an opportunity to not only extend their marketing reach, but also push the limits when it comes to campaign creative and execution. Digital out-of-home offers a solution designed specifically for impactful creative, which assists in positively influencing and elevating brand image. Our national digital platform delivered on this and on Heineken’s objective of heightening excitement about the upcoming games,” notes Howard Lonstein, Marketing Manager at Outdoor Network.

The Heineken creative invited consumers to ‘share the drama’, with additional anticipation being created by the insertion of a ‘live’ clock, counting down to the kick-off time of the tournament matches.

Delivering real-time, updated brand and event messaging, the campaign enjoyed a reach of over 995,000 consumers nationally, with over nine million impacts and an average frequency of nine.

Lonstein adds: “This ability to update in real time while rotating according to traffic flow allows Outdoor Network to offer brands a unique and compelling offering across its national digital network, ensuring extensive coverage. This was the very first of its kind in South Africa, and we’re very excited that we were able to partner with Heineken and their agency Red Star on this campaign, to deliver great value.”

The specific sites for the Heineken campaign were located on Umgeni Road and Sandile Thusi Road in Durban, along with key sites in Centurion and Menlyn (Tshwane), and Nelspruit (Mpumalanga).