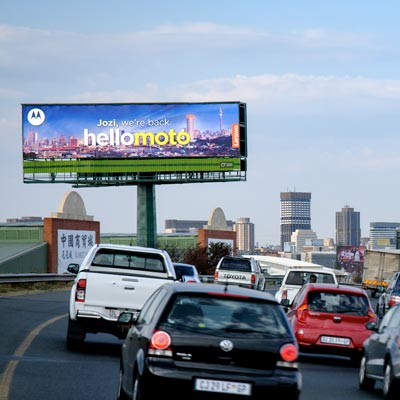 Traffic congestion in South Africa’s major cities is on the rise. So what does this have to do with billboards? Howard Lonstein, Marketing Manager for Outdoor Network, looks at an ongoing traffic index and other related research to show how the compelling spectacle of supersized, extended and illuminated billboards wins the lion’s share of South African commuters’ attention.

Dwell times on our congested roads are escalating and the commuter’s use of public transport is increasing. These increases are providing added value and opportunities for brands. Congested roads result in longer commutes. This in turn increases the opportunities commuters are exposed to in terms of Out of Home advertising. Specifically, well-positioned, highly visible large format billboards.

TomTom’s annual Traffic Index, which measures the impact of traffic congestion in over 200 cities around the world, states that commuters spend up to 11 days per year in traffic – with South Africa included in the index. According to the study, Cape Town is the most congested city in South Africa, followed by Johannesburg, with East London in third place.

New Out of Home advertising ‘spaces’ and ‘opportunities to see’ are created on an ongoing basis; however this process is accelerated during periods of rapid urbanization and implementation of infrastructural improvement. The nett effect of this is a further increase in traffic congestion. With motorists and commuters spending additional time commuting to and from work daily, opportunities for reach, impact and frequency of brand exposure abound.

In a developing economy such as ours, it is not surprising that the rise in traffic congestion has been exponential. Even though we have one of the most advanced road infrastructures in the developing world, congestion continues unabated. The more we extrapolate data and delve into the numbers, the clearer it becomes. Congestion has been increasing year on year, and will continue to do so for the immediate future.

A further constant is that congestion peaks during the morning and evening commute. Tom Tom data shows that travel time during peak periods is close onto 60% higher for Johannesburg when compared to a free traffic flow situation. Figures for other cities are similar in nature. Increased congestion leads to more time spent on the road, and thus greater opportunities for brands to communicate with their target market in this environment.

Figure 1: These graphs show the increase in morning and evening peak travel times in Johannesburg, when compared to a free flow situation. Stats provided by TomTom’s 2016 data 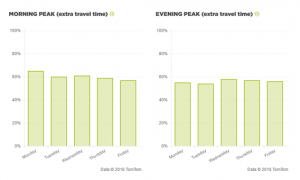 Local and national government-led infrastructure improvements further impact on congestion levels in the country. One need only to look at the effect of the M1 Rehabilitation project in Johannesburg. Due to the project, the Johannesburg Roads Agency (JRA) estimates that travel times have increased by up to 40%.

Rapid urbanisation often acts as a catalyst for change, across all spheres of society. One of the results of this move to the cities in the South African context has been the increased percentages of households that make use of public transport. More and more commuters are opting for public transport, from the Gautrain to mini bus taxi’s. Not to mention the eagerly awaited BRT transport system. The general increase in the percentage of households who use taxis is up from 59% to 68,8%, and those who use buses from 16,6% to 20,1% and those who use trains from 5,7% to 9,9%.

With the planned introduction of additional BRT systems and the compound impact of an additional 40,000 new cars added to our roads monthly, congestion remains an ever increasing reality.

The question is: how can brands and advertisers positively influence consumers perception, attitude and awareness through the medium of outdoor media canvases against the backdrop of ever increasing congestion?

Billboards are a highly effective medium through which to deliver brand messaging in a captive environment, and our congested roads provide just that. As a result, large format advertising platforms such as billboards should always be a leading/ integral inclusion in any strategic and integrated marketing campaign.

*The TomTom Traffic Index is based on 2015 data.