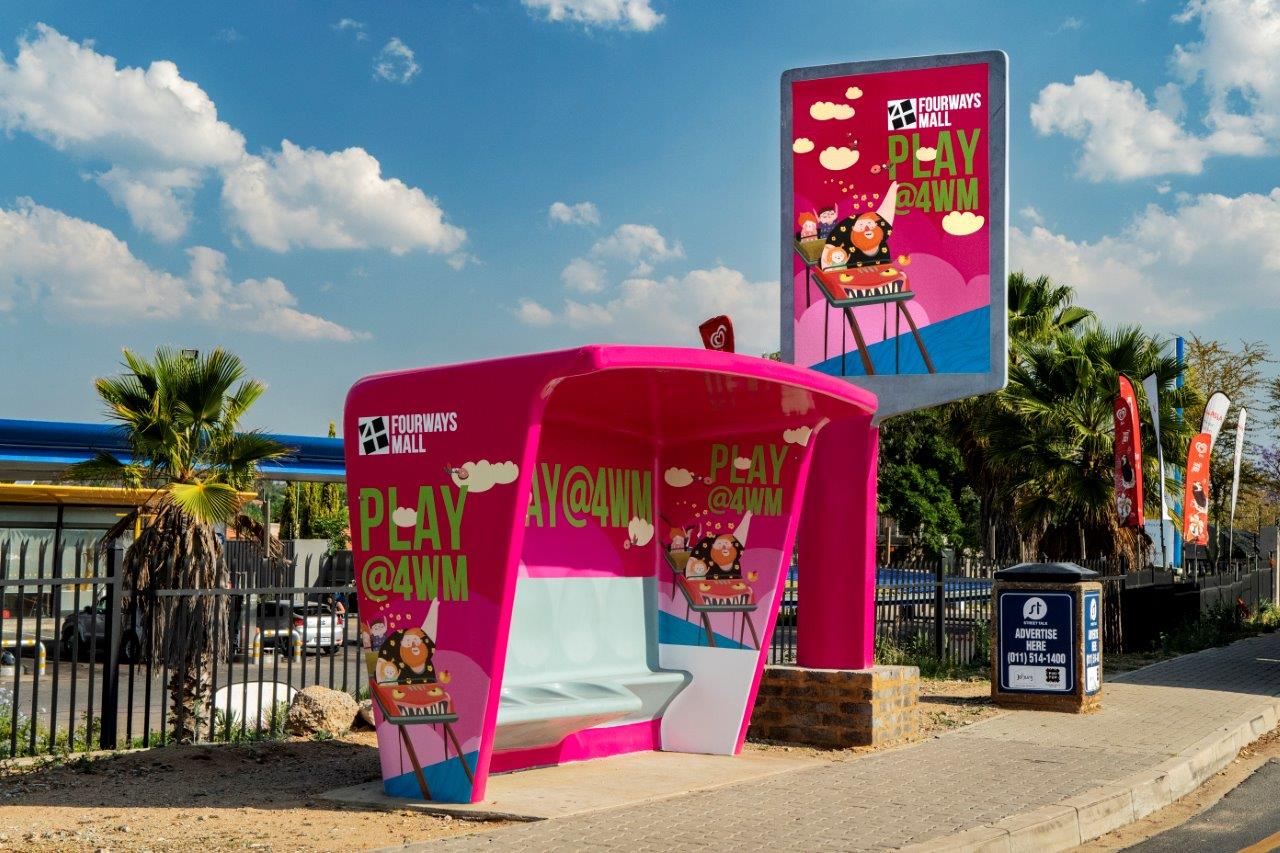 Fourways Mall has turned to out of home media to draw shoppers from surrounding areas, tasking Street Network with a visually striking promotional campaign on bus shelters and taxi ranks in the surrounding area to grab the attention of commuters in the general Fourways area.

These locations are key, as their proximity to the Mall greatly increases the chances of a Mall visit directly after experiencing the visual elements of the campaign. One of the findings of Arbitron’s 2013 OOH Industry Report found that bus shelter advertising drives response, with as much as 26% of consumers of a campaign immediately visiting the business in question.

The Fourways Mall creative is dominated by a bright pink background and features an animated ‘family’ riding a rollercoaster, with the invitation to mall visitors to “Play@4WM” and promoting a family-friendly offering. Fully ‘wrapped’ bus shelters are being used a means of attracting shoppers from surrounding areas to the Mall as new shops open. The creative will be updated as new stores open, keeping consumers engaged and up to speed on the latest retail developments within the mall.

Fourways Mall opened its doors over 30 years ago and has become a landmark shopping destination in the northern suburbs of Johannesburg, and specifically the greater Fourways area.

The last three decades have also seen the Fourways area expand dramatically, with a number of businesses making their home in the suburb, along with numerous housing complexes such as Steyn City, additional shopping facilities, and nearby entertainment destination such as the Fourways Farmers Market which draws thousands of visitors on a weekly basis.

Once completed, the 178,000m2, Mall will be the ultimate shoppertainment family destination, with several exciting venues already opened as construction on the broader centre approaches completion.  Stores in Fourways Mall cater to just about every need, from luxury homeware to arts and crafts, electronics, fashion, jewellery, banking, health and wellness, along with everyday essentials. There’s also an extensive entertainment offering, with a brand new Ster-Kinekor movie complex and kids’ cinema, as well as a wide variety of restaurants and fast food outlets, along with play areas for children.

The first phase of the campaign was concluded at the end of December 2018, with the second and third phases due to follow in 2019.