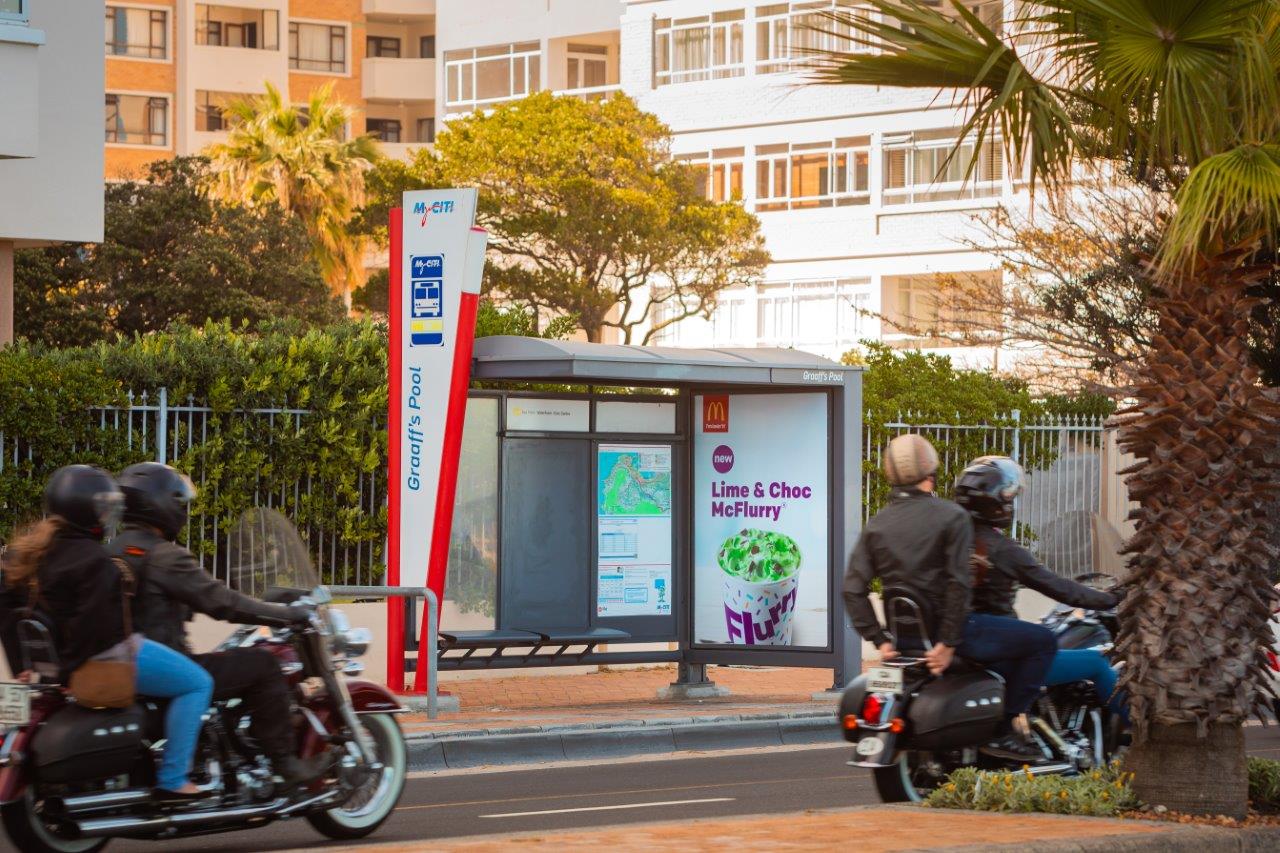 In a bid to raise awareness of its South African summer campaign and to drive consumers to its restaurants, fast food giant McDonald’s opted for a street furniture campaign towards the end of 2018 on Street Network’s bus shelters.

The campaign rolled out on selected and strategically-located bus shelters across Cape Town from the first of September to the 31st of December, targeting time-poor commuters in high-dwell time areas on the extensive MyCiTi BRT network, focusing on upper income neighbourhoods and areas home to consumers with disposable spend.

McDonald’s is one of the most prolific quick service restaurants making use of out of home advertising worldwide, and this localised campaign was strategically placed considering research from the OAAA shows that thirty-five percent of commuters that have seen an out-of-home campaign, buy a product after seeing it being advertised.

September saw McDonald’s unveil its South African summer menu and a host of new specials, including a lime and chocolate McFlurry and a competitively-priced McChicken deal that would have caught the eye of hungry consumers who like a chicken burger from time to time.

The Quick Service Restaurant (QSR) sector in South Africa is both competitive and lucrative, accounting for in excess of twenty-nine percent of South Africa’s franchising market which in 2018 was valued at R587 billion Rand.  This means QSR has by far the biggest share in franchising turnover according to FNB, and the competitive nature of this industry is the reason brand visibility and awareness are key to retaining and growing total revenue.

The McChicken is an iconic McDonald’s menu item, having first been introduced back in 1980. It has an interesting history, having twice been removed from the menu, only to be reintroduced as a result of customer feedback.

The McFlurry vanilla ice cream in a cup is also a long-standing McDonald’s menu item, having been around for nearly 20 years, with different flavours introduced on a regular basis.

“As we were dealing with food and a campaign that sought to drive footfall to restaurants, this was very much a visually-strong campaign, focused on the specific products in question – the McFlurry and the McChicken – and showing the consumer exactly what the proposition was,“ says Jonathan Everest, Head of Sales at Street Network. “Bus shelters are positioned to catch the attention of consumers on their daily commute and this was a solution that amplified and extended the reach of the campaign in a bold and creatively engaging manner.”

This street furniture campaign was effective in reaching approximately 873,000 people and delivering around 8.7 million impacts with an average frequency of 10. (ROAD2015/16/17C)

“This was an example of the ability of out of home to drive a purchasing decision,” says Everest. “In this regard, small format OOH is one of the most effective platforms driving both engagement and influencing that purchasing decision.”

McDonald’s should be credited for creating innovative new menu items alongside some of its much-loved classic dishes, but Street Network provided the platform on which to communicate this new offering with consumers, and drive them to McDonald’s restaurants.