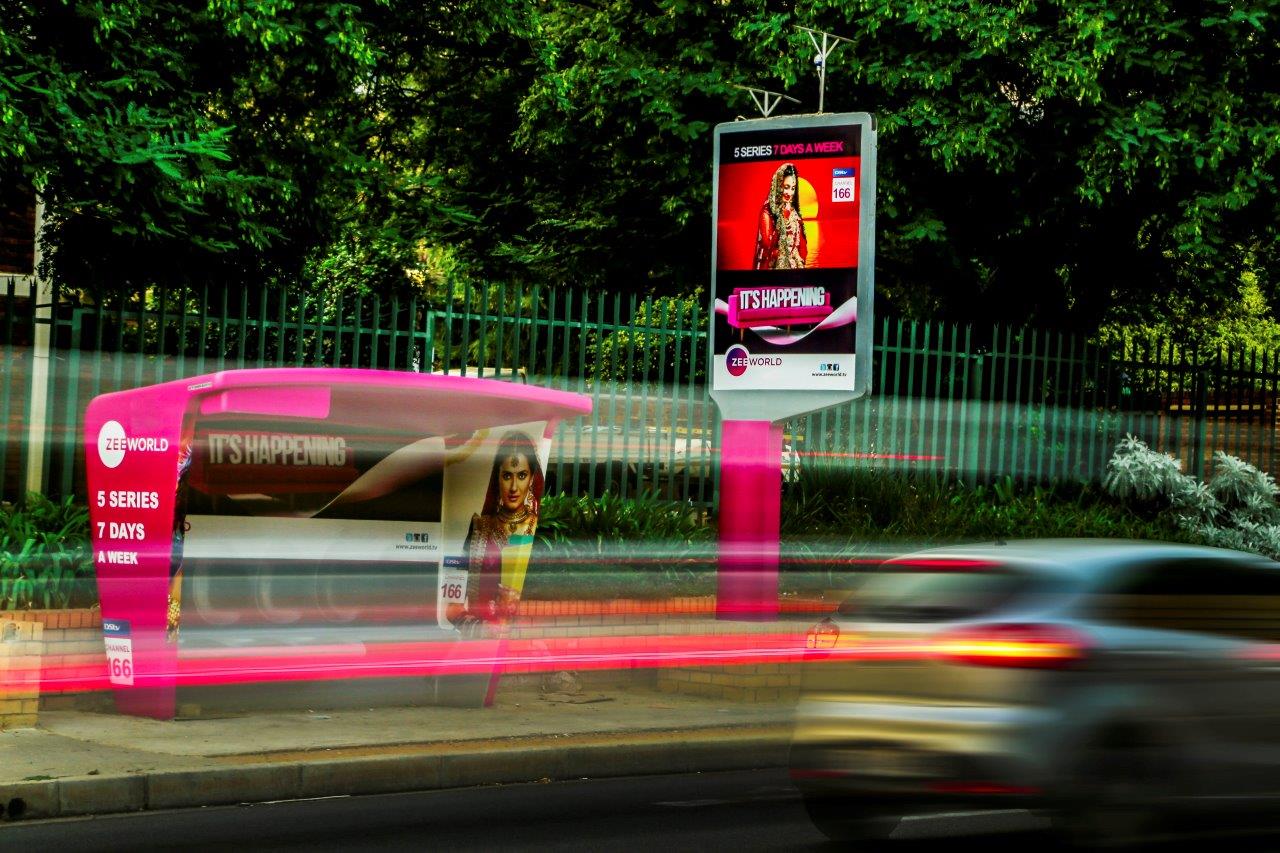 Digital satellite television channel, Zee World, which offers mainstream viewers in Africa the best in award-winning Bollywood movies and series, a variety of food, kids and talent shows and lifestyle programmes elected to use Street Network Bus Shelters in order to extend the reach of its latest ‘It’s Happening’ campaign.

Street Network’s bus shelter offering provided Zee World with the ability to effectively target consumers within a geographically selected region and create talkability through its impactful and creative campaign execution. With a combined reach for the campaign of over 550,000 people monthly at an exposure frequency of 7 (ROAD 2016/17C), Street Network provided a solution that maximised the campaign reach while engaging a highly sought after audience.

“We had no hesitation in selecting bus shelters for among other reasons the creative canvass that they present to consumers making use of all forms of transport, whether public or private. We chose sites across the greater Johannesburg area with a view to reaching consumers across the entire LSM spectrum that represent the overall viewers of the channel,” comments Shaun Kennedy, OMD South Africa.

In order to reach this diverse audience, Street Network provided a range of geographically targeted bus shelters situated along key high-traffic routes across Johannesburg’s central and northern suburbs. An ideal solution for Zee World since small format Out of Home is one of the most effective media platforms driving consumer recall and engagement.

According to Outsmart, Out of Home is a key medium for Entertainment and Media brands, with over 61% of adults recalling advertising by these brands when seen on Out of Home platforms. The report further shows that 59% of those surveyed ‘talked to many people’ about television, with 56% noting that they are very likely to convince others about TV. When combined with the 2017 Nielsen Poster Advertising Report which reflects ‘recall of Out of Home messages seen’ at 89%, it is evident that integrating Out of Home and Street Network’s Bus Shelters in particular into the marketing campaign was an effective and strategically well planned media buy for Zee World.

Comments Jonathan Everest, Head of Sales at Street Network: “The five-month extended campaign was designed with highly impactful creative and copy to ensure that consumers exposed to the bus shelters would take note of and recall the messaging. So much so that it resulted in high recall, evidenced by great talkability amongst other brands and media agencies to name a few.”

“Rising above the clutter in this manner is highly desired by brands, and bundled with effective ROI, is precisely what Out of Home and specifically street furniture advertising is able to deliver,” concludes Everest.

1 (Out of Home works for Entertainment & Media brands n.d.)